This was a piece I posted on SpaceCollective in January 2010. It’s probably still the most widely read thing I’ve ever written so I archived it here as well. 15-12-2011.

“We may be on the edge…
…of nothing particularly important.” – Bruce Sterling 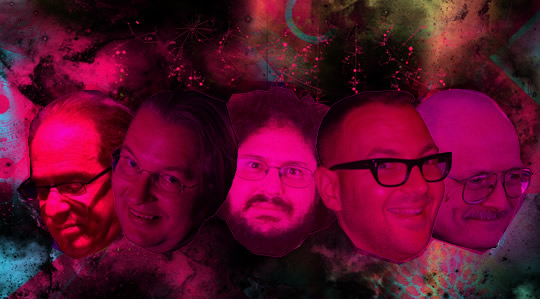 It should be clear to everyone on here that some time in the near future the ever accelerating pace of technological development will inevitably lead us all to become giant pink heads floating in space, or something. The singularity is on its way, and once it has arrived we will break out of the present as if by magic and finally inhabit the future we could never quite catch up with. However it turns out that some people don’t get this idea at all and keep trying to find fault with it, even after you concede that they will probably get to pick their own colours for their floating space heads.

This is going to be a basic rundown of singularity skeptics arguments, just an overview as there is no way I can document the long, in-depth fights nerds have about this stuff. If you’re looking for hard core material and discussion, look away.

If you’re completely unfamiliar with the concept of the singularity there are several videos around you can watch on the subject. Most will involve the incredibly talented and famous pill muncher Ray Kurzweil showing off his charts at great length. For those of you who don’t have a few hours available to listen to Mr. Kurzweil speak I have made this convenient summary of most of his talks: 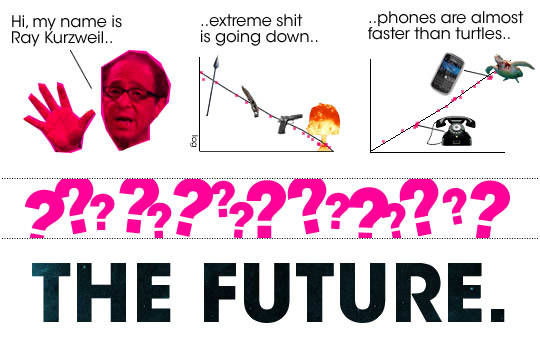 This obviously raises questions, and inevitably arguments. We’ll look over some of the most common themes here today.

Argument #1: “Fucking whatever man, pass me that shit.”

Also known as the ‘No way’ or ‘I can’t imagine that ever happening’ position, it is in its various forms the most commonly used. Should you encounter it, its probably best to just avoid any further discussion of the topic. They say that in a post-singular world, the post- or super-human entities inhabiting it will be to us as we are to worms. People who deploy this argument will be those worms, I’m confident the rest of us will make out like at least cockroaches or goldfish. 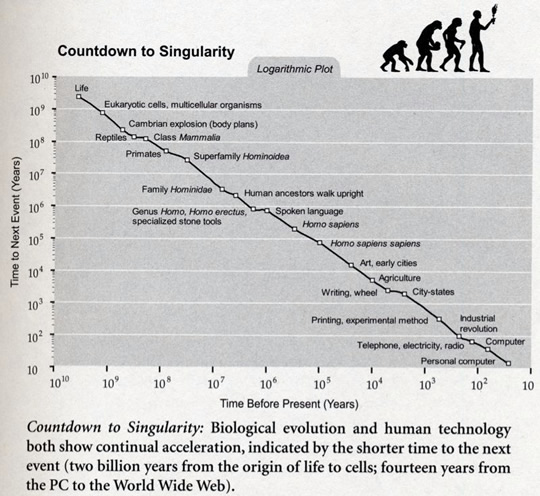 The chart should explain itself, the problem people have with it is that they think Ray just picks and chooses events that will suit the chart nicely and keep everything on a smooth line. He refutes this though with the claim that he can throw up an historical timeline from a number of sources, and while the dots may scatter a little you can still draw an average line that comes down at around the same pace. It’s not a very exciting argument.

Argument #3: “Debugging is a bitch dude, this will never work.”

This is the idea is that creating software smarter than us can’t be done. At first this seems like a pretty good argument because writing software sucks. The analytical, problem solving stage and creating a mental abstract structure of your solution may be fun, but then you have to type a bunch of stuff and swear at the computer a lot, which it may hold against you once its intelligence exceeds yours. But while its likely that programming intelligence will be a lot harder than everyone thinks (seeing as it always has been), I think there are enough smart guys around to get it done eventually. They may end up not having to write much at all, but instead just mashing up some open-source wetware and home brewing pot-luck mutant abomination brains.

If you want to go long on this argument I recommend reading One-Half of a Manifesto by Jaron Lanier, to which Ray Zurzweil has published a rebuttal; One-Half of an Argument, both of which are commented on in nauseating detail all over the web. 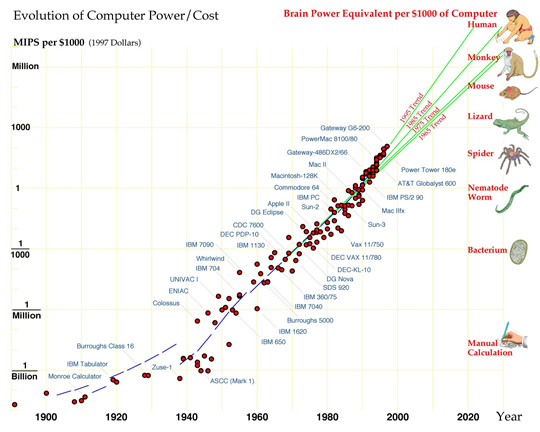 Up to now this argument has held the most weight in my opinion, although I’m sure it too can be explained away by both sides to the point where I’ll just lose interest. Chaos evangelist & axe-wielding maniac Bruce Sterling has a thing or two to say about this (see video below), allow me to paraphrase:

1. What the shit Ray? How exactly do you know an IBM PS/2 is as smart as a nematode worm? We don’t even actually know what intelligence is, so this chart is kind of stupid.
2. Spiders, Lizards, Worms & Bacteria have all been around for millions of years already. Almost every electronic device on your chart is extinct. Think about that, there’s your future, all dead & buried.

At this point it seems like Bruce is poised for flawless victory, but then he makes a bad move and pulls out his own chart. We all know that a chart for a chart leaves everyone bored, but I’ll run this down very quickly. On the left you see the Gartner Hype Cycle, the curve that shows how we hype things, slag them off and then get over it. This is the chart Bruce claims we live by, and he’s right, but Ray is quick to point out that the straight line on his chart is in fact made up of a series of s-curves (see image on right), which probably match up pretty well to the rise & decline of hyped technologies, so there isn’t really any argument left there. 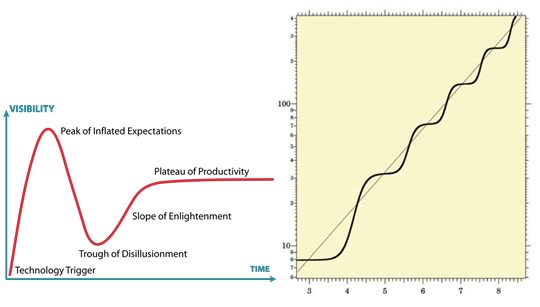 If you’re still reading it’s probably best you start following links away from this page. A good place to head might be The Skeptics Guide to the Singularity at World of Wierd Things, where a much better discussion takes place and a bunch of other good content can also be found.

The Coming Technological Singularity: How to Survive in the Post-Human Era is the document that really kicked this whole thing off, it was written by Vernor Vinge in 1993, and he doesn’t seem too happy about his survival prospects.

By far the most entertaining material on this subject is Bruce Sterling’s talk for the Long Now Foundation, “Your Future as a Black Hole”. I recommend watching this for a few laughs if nothing else. The sound on the video is rubbish unfortunately, so I’ve also embedded a separate audio track which is recorded properly, and has the added bonus of the Q&A round at the end. Just synch the two up and you’re off. There’s also a summary of this written by Stewart Brand.

Charles Stross has written an excellent book called ‘Accelerando’ , which chronicles three generations of a healthily dysfunctional family and their pet cat passing through a technological & economic singularity. The book is available for free online.
He also wrote Singularity! A Tough Guide to the Rapture of the Nerds, which provides the internets currently most accurate account of the true nature of the Singularity.

Cory Doctorow didn’t actually have anything to do with this, he just shows up everywhere. I happened to image search ‘rapture of the nerds’, and there he was, waiting for his pink head to float in space. His books are good too though, and also available for free under Creative Commons licenses.