Back To The Futures Cone

An interstitial post between the mashings of diagrams to look at some comments I’ve had about the Futures Cone before I go back to abusing it again. There is a lot less swearing in this post than the last one, I promise. If you have no idea what this is about, you might want to check out parts 1 & 2 in this series, Theory of Change and the Futures Cone, and Theory of Change and The Golden Circle.

Dr. Joseph Voros got in touch to let me know about ‘Preposterous Futures‘. To be honest I was aware they were around, but I had just left them out of my model because they were inconvenient to reconcile at the time. That’s how that works, right? Anyway, here’s a updated diagram: 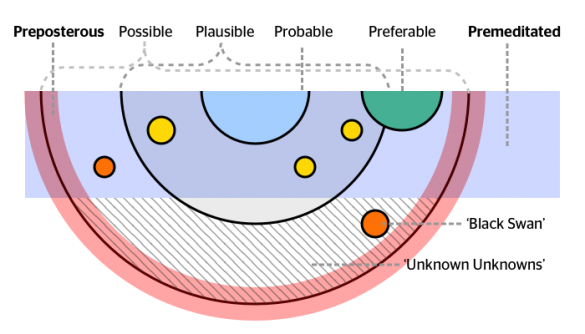 OC DO NOT STEAL

An interesting difference pops up here. In Dr Voros’ cone Preposterous Futures lie outside the ring of the possible, beyond what he calls the Clarke-Dator Boundary. His border for ‘Possible’ is at what we believe to be possible. Personally I’ve always seen the outer edge of the cone as the limits of physics, not of imagination, as such I’ve let Preposterous fall on both sides of Possible.

An update on the origin point of the Futures Cone

Open or closed?  Dr. Voros was also generous enough to provide his view on the origin point of the cone, and let me know that in his current model it is in fact a pupil/iris, implying an interior consciousness behind the eye. Stay tuned to The Voroscope for more on this idea.

I don’t want to have to mess with consciousness for purposes of these posts, but I like the idea of the origin being a lens. That’ll almost certainly come back in a later diagram mashup.

I was mildly taken aback by this comment from Wendy Schultz. Having spent a small amount of time looking at futures cones now I am here to tell you they do not have a lot of self-respect. The Light Cone on the other hand has dignity and integrity to spare.

I’m not entirely sure what to do with this yet. Rest assured that in time I will unnecessarily overthink the matter, but for now I’m just going to continue to use a self-deprecating Futures Cone.

Thank you for your continued interest in these cones. My most tenuous and cludgy work is yet to come, please maintain high levels of excitement while waiting for the next post!