The Futures Cone and The Engagement Pyramid

If you’ve ever done any kind of social-media strategy – or strategy work for any organisation that counts on it’s supporters to operate – you should be familiar with this diagram. At least something very similar. If you’ve not seen an engagement pyramid before or if you’d like a quick refresher, we’ll wait here for a minute while you read all about it. 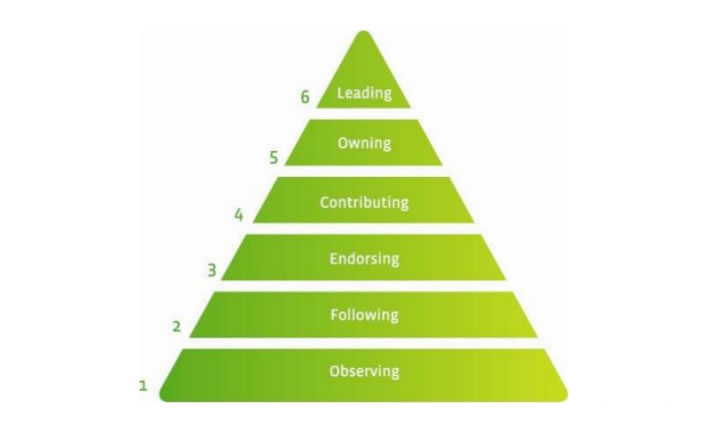 The Engagement Pyramid as illustrated by Groundwire

In short the diagram is designed to illustrate the levels of participation you might have around a cause or organisation. Low-key support from a large base, with roles higher up the pyramid requiring increasing levels of (possibly ongoing) effort and coordination.

If you have a cause (which is to say, there is a Preferred Future that you wish to manifest), you’re going to need support. Especially if the change you would like to see in the world requires any amount of legislative action, money, blood, sweat or tears. And what doesn’t.

But you know all that already, you’re here to see another diagram get smashed! Let’s bloody get on with it then.

Ok! Scroll back up and have another look at that diagram real quick. Got it? Great. Now, first we’re going to slice down the middle of this (conical) pyramid. This reveals the important insight that leadership is in fact not a little hat that sits on top of your organisation, but goes all the way to its core. At least it should anyway.

Then we flip the pyramid on it’s side! I know you’ve seen this done before. Finally, we squish it together from either side, compressing it into a lens.

Slice, rotate and squish. So easy!

What? Why would we do this? Recall that in Part 1 we briefly discussed the origin point of the Futures Cone. As was later clarified, the origin is in fact a lens. Our newly moulded engagement lens, through which your organisation can project its agency into the future.

It’s the eye of the cone!

Don’t get too hung up on the actual physics of lenses now, but humour me in entertaining the correlation; The bigger your lens, the more light you can shine on an issue, but if that light isn’t focused not a lot will get done. It’s the roles closer to the centre of the lens (or top of the pyramid if you prefer), that determine how powerful, and how focused that light is.

Go back to Part 1 again, where we stuffed a Theory of Change into a Futures Cone. Now with our engagement lens as the origin of the cone, the light shining through becomes the force you can bring to bear in dragging your future objectives out from the Possible edge towards the Probable centre of the cone. A capable organisation will be able to flex that lens, mobilising supporters with a compelling ‘Why‘-driven narrative when key milestones need to be hit and providing clear paths through the actions that must be taken. Hopefully, with sustained effort(s) over time, the final objective (the why) can be achieved.

Yes. I might tie all this stuff together a little more strongly with a rewrite and some nicer pictures at some point. Then again I might not.

If you’ve been able to follow this whole thing along, congratulations! I’m not sure what we have made but it may be any of;

In short, YMMV. If you have questions, you can find me out here on the internet. See ya!