Theory of Change and The Golden Circle.

The second part in our series of diagram mashups, following on from Part 1, Theory of Change and The Futures Cone. This one has another cone in it because I know you all love the cone. 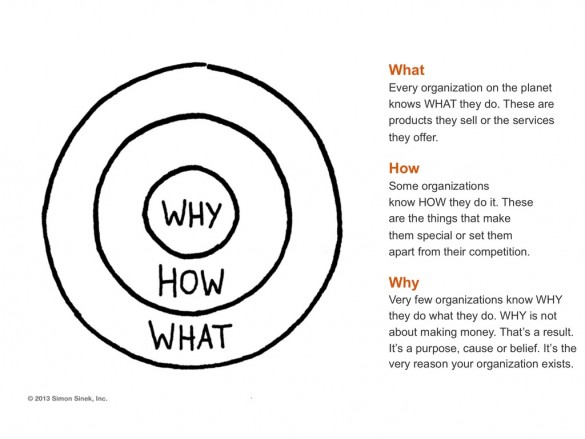 Here we have Simon Sinek’s Golden Circle. If you can stomach another TED talk, you can watch him explain it here. It’s a handy diagram with which to work out the essence of your message or mission. The basic principle is that effective communication of ideas is done by thinking and communicating from the inside of the circle out. Start with ‘Why’. As Sinek is fond of saying; “People don’t buy what you do. They buy why you do it.”

Speaking from the ‘why’ would have you using concepts that appeal to the limbic system (old lizard brain, or ‘gut feeling’). People can then rationalise their decisions on the basis of those feelings. You may recognise the approach as deployed by Apple’s marketing department, or your local populist demagogue. This as opposed to barraging your audience with facts & figures and making them do the hard work of figuring out why they should care.

A fun thing to do with the Golden Circle is to extrude it out into a cone; 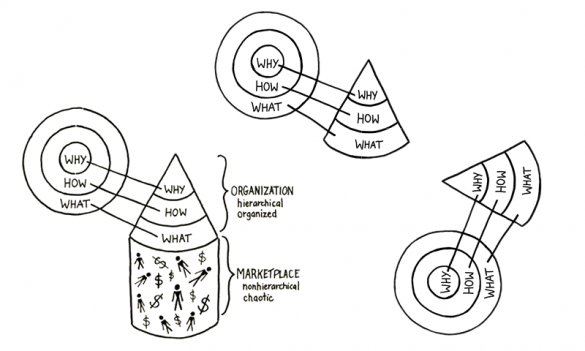 At center-top is the basic version of how this may appear. An unfortunate consequence of this form is that it taken to correlate to top-down organisational structure. The top of the cone or ‘why’ becomes the position of the Leader, ‘how’ is the domain of top-level executives following the vision of the leader and ‘what’ is supposed to be the things a company says and does.

The bottom-left version of this top-down Golden Circle is explicitly labelled as an organisational hierarchy. The Golden Cone becomes an exhaust blowing your organisation’s products and services out of its rear-end into a bleak marketplace chaos-void filled only with dollar signs and charred skeletons.

Finally the bottom-right variant depicts the cone as a megaphone to enhance the volume with which your company’s marketing is shouted at the world, and because you have a highly refined message formulated specifically to target the limbic systems of puny humans trapped by capitalism, it’s super effective.

Too bad “do business with” has to mean “sell shit to”.

But don’t think that I’m shitting on the basic idea of the Golden Circle, it’s a nice, simple little model that can be used to great effect. It’s just a shame that everything useful for thinking about communication ends up being about fucking marketing. That or weird corporate leadership personality cults where all power must flow from the vision of the exalted one at the top of the pyramid.

Theory of Change and The Golden Cone

So what do I like better as a use for this cone shape? Recall from the first instalment of this series our basic model of a Theory of Change. Instead of mapping the Golden Cone to a corporate structure, how about we cram one of those in there instead?

Now the tip of the cone, the ‘Why’, correlates to your long-term vision. ‘How’ you intend to achieve this vision maps to your outcomes, and ‘What’ to your activities, the actions that must be undertaken in order to achieve the desired outcomes.

Tip it over to the right, and instead of a megaphone blaring marketing out into the world you have an arrowhead driving with intent towards the realisation of a future goal. A vision that can maybe be organised around in ways other than follow-the-leader hierarchies. More on that in a next instalment, when we will go back… Back To The Futures Cone. 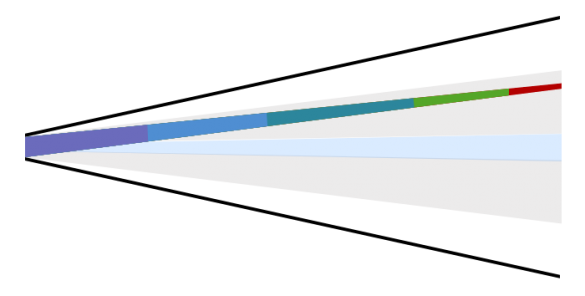 Pewpewpewpew! Yup, it’s all going to get even worse.