Theory of Change and the Futures Cone.

Our friend the Futures Cone

I assume you’re familiar with the Futures Cone, and its concept of ‘P’ futures (Possible, Plausible, Probable, and Preferred). You may also know it as the Plausibility Cone, or the Futures Vuvuzela™. The attribution decay is strong with this image, this particular example is just the first that comes up in a Google Image search. If you’re not familiar with the Futures Cone at all, maybe take a moment to read at least the first few pages of this brief primer on Futures Studies (Voros, 2001), otherwise the rest of this post will make even less sense.

Visual semantics of depicting the ‘now’ in Futures Cones 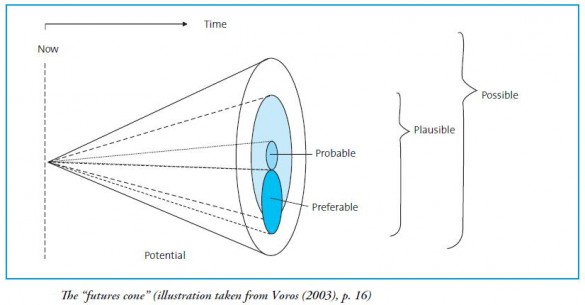 While searching through images of the cone I’ve noticed two styles in the depiction of the origin point of the cone, the ‘Now’. First is the open circle as shown in the first figure in this post, second the single point as shown above.

As these diagrams are widely stolen & re-appropriated it’s unlikely that most people are using either variant with specific design intent, though I know some (e.g. Changeist), have consciously chosen the single point in order to reflect an individual’s point of view.

It may be a useful convention for the open circle to specifically represent a larger set, say perhaps about 7 billion of those points. This distinction may be beyond the scope of the intended use of the Futures Cone, but it helps serve as a reminder that one person’s future is not necessarily the other’s, and it’s something I intend to return to in a later post abusing another diagram. If you think I’m overthinking this then strap yourself in or eject now, because it’s about to get a lot more overwrought.

Now I’d like to introduce a new capital ‘P’ Future, because lol why the fuck not. Please meet the set of ‘Premeditated Futures’; the set of all futures people have previously thought about. ‘Considered Futures’ would be a better name but P’s tho innit. Here’s the idea illustrated in a cross-section of the Voros Cone. 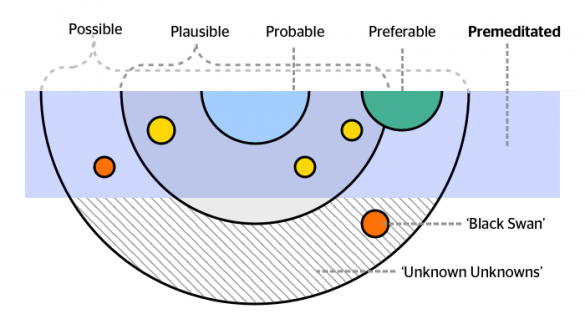 Why yes, I have been drinking.

The phrase ‘Theory of Change’ gets thrown around a bit a various contexts, here we’re talking specifically about the structured backcasting method for strategic planning described on theoryofchange.org. A long-term future goal is identified, and the steps necessary to achieve that goal are then visually mapped into an ‘outcomes framework’. This graphic model is accompanied by a written narrative that explains the logic of the framework, with as QA that it is plausible, doable and testable. Here’s a basic primer on Theory of Change if you’d like to know more.

This graphic stolen & cropped from relativ.co.za. I think their arrows are pointing in the wrong direction but whatever, you get the idea.

The image shown above is a heavily simplified representation of a ToC (for a much thicker example with accompanying narrative I’d suggest checking out this assessment from the SC4CCM project). The basic principle isn’t hard to get your head around. Now let’s see what happens if we try to stuff this diagram into a futures cone…

Theory of Change and The Futures Cone 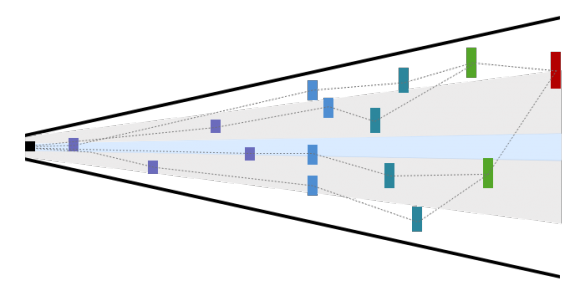 Here’s one diagram squashed into the other. Colours from the previous diagrams, hopefully this makes some sense.

So what a Theory of Change does is it maps out the steps that need to be taken in order to drag a Preferred Future out from the periphery of borderline Plausible/Possible Futures into the Probable. 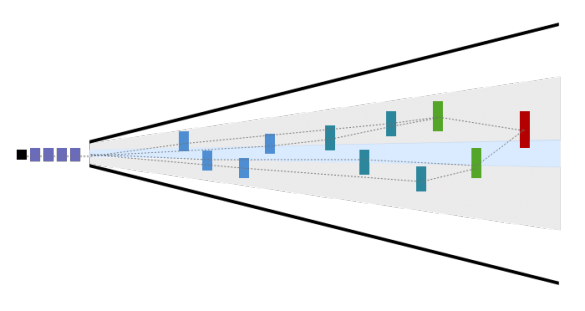 As time passes, if your planned activities are successfully executed your outcomes should be moving closer & closer to the Probable Future. The victory condition for a Theory of Change is having the Long-term Vision locked in dead-center of the cone, as such having become inevitable.

What’s the point of all this?

Just spitballing. With any luck these explorations can contribute in some useful way to the broader conversations around these kinds of work. There will be more diagrams mashed together in the near future.

If you’d like to give me notes on my terrible ideas you can find me on twitter. And remember kids, don’t drink & diagram.